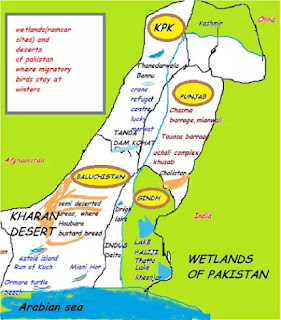 Winter is approaching and Pakistan is once again ready to welcome several migratory birds in its cozy wetlands and at Ramsar sites which are dotted throughout the country. These wetlands mostly are the last destination of birds that begin their long journey from lakes of Siberia to avoid harsh gushes of frosting and coldness in winters. Pakistan welcomes a large number of Siberian cranes, common crane, Mallards, Egrets, geese, Waders and Pintails and few flamingoes every November when they enter in here from parts of Afghanistan and Iran. Few birds cross the mighty Himalayas from the Chinese border to stay in the wetlands of Pakistan.
ALSO SEE: Why do birds migrate from Siberia?
WHAT THE WETLAND IS?
Large marshy ponds, lakes, river deltas, seepage places near oceans and seas or low lying areas which constantly puddle due to flood or rains turn to freshwater wetlands and attractive habitat of waterfowls.
RAMSAR CONVENTION AND RAMSAR SITES
The treaty about the conservation of wetlands and the protection of waterfowls has been passed in Ramsar (a city in Iran) in 1971. Almost every UN country is taking measures to perk up these swamps. Many wetlands in the world are declared as Ramsar sites including 19 sites in Pakistan, where the concerned bodies are responsible to take care of waterfowls and rehabilitate the endangered birds’ species.
Let’s have a look on wetlands of Pakistan which are called heaven for providing comfortable breeding zones to migratory birds:
THANEDAR WALA FRESHWATER RESERVOIR (A Ramsar site), BANNU
Thanedar Wala Game reserve is a wetland and a Ramsar site, near Bannu district, KPK, in Pakistan. The dazzling marshy green water channels along a 4 km wide area at Thanedar wala bring all birds to still stand over here. Many of these waterfowls have flown about 4500 km over the Himalayas through Indus flyway or Green route from Siberia at the end of October to breed or to nourish their young in the temperate climate of this wetland every winter. A large number of Cranes, mallards, pintails, egrets, and geese breed in Thanedar Wala. The government recently has constructed a bird watching Park in the place to view stunning little guests from far.
TANDA DAM, KOHAT (a Ramsar site)
Many migratory birds from Siberia stay at beautiful Tanda Lake among slopes of Hindu Kush Mountains, a Ramsar site in Kohat. Approximately 10,000 species of birds fly over here to spend their winter among dense green pine trees.
Tanda was a hushed place for birds before a lake view park and bird watching facilities for tourists are constructed here. Visitors and tourists can catch up Herons flying high towards Indus River accompanying the pintails and Geese enjoying the tasty fish party amid pine trees of Tanda Lake.
CRANE CONSERVATION CENTER AT LUCKY MARWAN, WILDLIFE PARK, KURRAM RIVER
On moving a little further, there is a crane reservation center and Wildlife Park near Lucky Marwat in KPK, Pakistan. This center aims to provide captive breeding facilities to birds. Visitors to Wildlife Park can watch ostrich, peacocks and migratory birds in cages and aviaries.
CHASHMA BARRAGE, MIANWALI, PUNJAB (a Ramsar site)
Chashma Barrage is constructed on River Indus and is another destination of migratory fowls. Chashma Barrage being a Ramsar site has been supplied special conveniences for providing a safe area for migratory fowls. The heavenly blue Indus delta fabricates many cozy swamps near Chashma Barrage for several migratory birds. These birds can also be seen flying in near farms and towns of Mianwali in winters.
TAUNSA BARRAGE, PUNJAB (a Ramsar wetland)
Taunsa Barrage on Indus River is another Ramsar site and a wetland to provide a hang about for migratory birds. Despite low rainfall in winters, water in Indus flows with valor in this area to feed the migratory guests. Visitors and local people can meet a variety of migratory flora and fauna among muddy swamps of Dera Ghazi Khan near Taunsa Barrage.
LAKE HALEJI, A FRESHWATER LAKE, THATTA, SINDH (a Ramsar site)
Lake Haleji in Sindh is known to Bird’s paradise around the world. It deserves to call ‘A BIRD’S PARADISE’ as around 100,000 species of birds hang about and breed here in the marshy soil of Mehran.
Covering an area of 7 km square, Haleji Lake with the mild sun, the breeze from Indus, a hand full of fishes and flavorsome turtles among mysterious dark mangrove trees made this lake the paradise for migratory birds. Lake Haleji’s brackish seepage lagoons pull migratory birds here like a magnet. Siberia cranes and common cranes find lake Haleji as gushed placed to breed and relax in winters.
KEENJHAR LAKE, THATTA (a Ramsar site and wildlife sanctuary)
A few miles away from Haleji lake, migratory birds also stay at Keenjhar Lake. Keenjhar Lake is a freshwater lake near Indus River which becomes home to many migratory guests who approach there to amuse with mild winter. Keenjhar lake bears a throng throughout the week that comes here for birdwatching. The increasing trend of bird watching at Keenjhar Lake has troubled the isolation of waterfowls. Any visitor can simply observe pairs of black-crowned herons and families of Pheasant-tailed Jacana roaming there annoyed with their freshly hatched brood at the shrine of Sindhi legend Noori Jam Tamachi in the middle of Lake Khanjar.
INDUS DELTA, SINDH
Apart from full-size wetlands, few small wetlands from upper KPK to Sindh are privately owned and managed by the private owners. Many people catch the birds from live flocks and keep them in their private wetlands. Mostly, they take good care of migratory guests.
ALSO SEE: Routes, speed and time taken by birds while migration